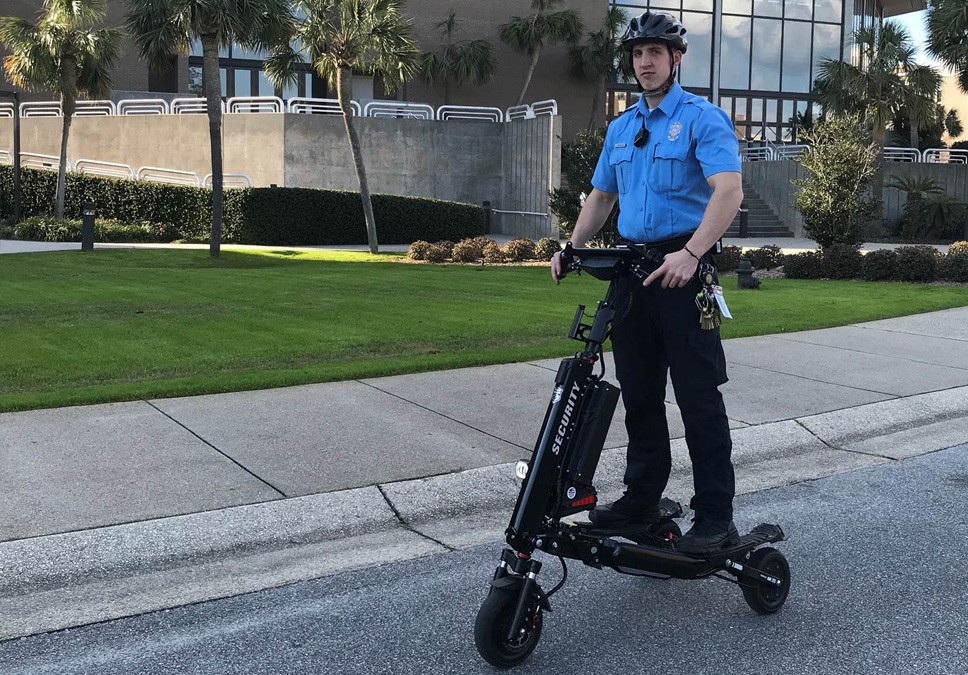 For years, security officers at Pensacola Christian College relied on Segways to patrol the private Christian school nestled in the westernmost city on the Florida panhandle. But with the closure of Segway’s Personal Transport division, a new solution was needed. Enter the Trikke Defender, part of Trikke Tech’s lineup of personal electric vehicles built expressly for security and law enforcement purposes.

So how’s that working out so far?

“The Trikke Defender has stepped in as an excellent replacement,” says Ben Justus, security supervisor for PCC. “It has significantly more speed than a Segway, which has improved our mobility.”

Justus also notes that while the new vehicles do present a professional image, the students also think they look cool.

Let’s face it: authority figures looking cool is always a bonus. So, too, is the fact that the officers like patrolling on the three-wheel, cambering Defenders:

“Learning to ride is a little more nuanced than a Segway because of the throttle and brakes,” says Justus, “but all the officers have picked up on it fast and enjoy riding them.”

That adds up to Trikke Defenders being a suitable and durable replacement, according to Justus. As far as its best features, the security supervisor cites the speed, the removable batteries, the pre-configured light package, and the fact that Trikkes are quieter than Segways.

“Mr. Beleski has put a lot of good engineering into the product, so I can’t think of anything that I would change,” says Justus, speaking of Trikke Tech CEO and Chief Engineer Gildo Beleski. “Overall, it is a good product and better than Segway.”

Trikke Defenders can also be seen cruising the corridors of other colleges and universities, including the Cal-Berkeley, where patrolling on Trikkes makes police officers more approachable.