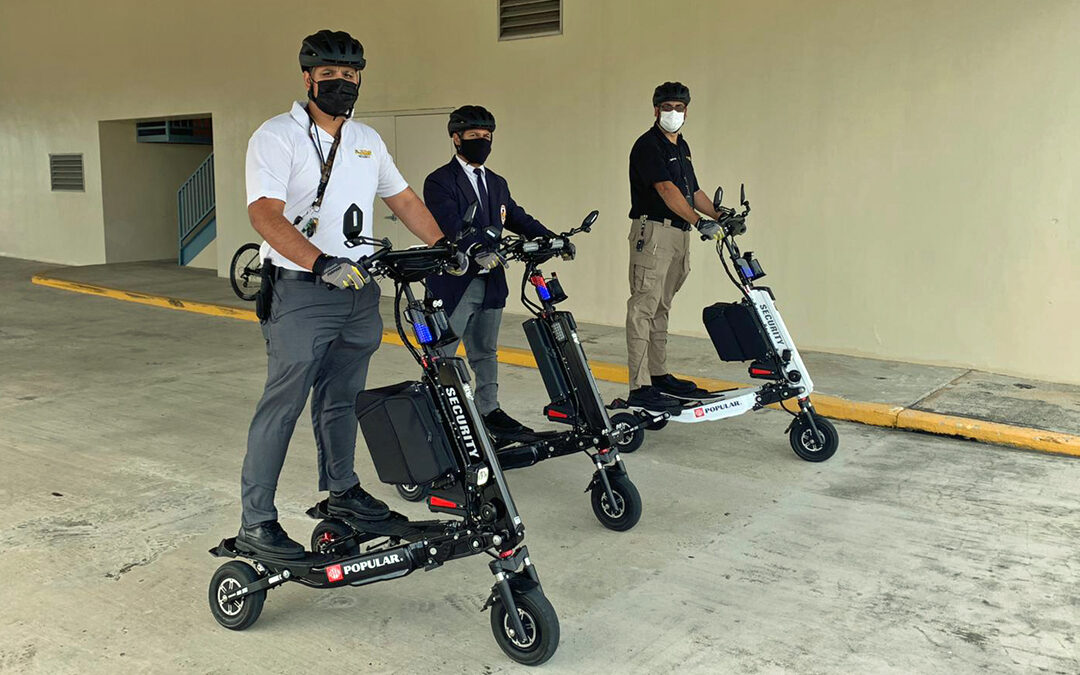 How a “lightweight” and “highly efficient vehicle” is taking the island by storm.

When the security director for Puerto Rico’s longest-serving bank happened upon the three-wheel electric mobility vehicle known as the Trikke, he immediately saw the light. Now the financial institution is banking on security Trikkes to help things run smoothly for the company that’s been doing business on the island for over 125 years.

Enter the Trikke Positron and Trikke Defender, two security Trikkes that keep paying dividends for the company. Pérez says Banco Popular is “very proud and happy to patrol using Trikkes.” He also praises them as “extremely easy (when it comes to learning how to ride) and very enjoyable (as far as the ride itself).”

Banco Popular Puerto Rico is headquartered in San Juan on a stretch commonly known as La Milla de Oro, or the Golden Mile, in the city’s Hato Rey business district. The bank operates under its parent company, Popular, Inc., a financial services conglomerate that first opened its doors in 1893 when the island was still under Spanish administration.

The chance meeting was the start of a beautiful business relationship:

For example, says Rivera, “We just sold a couple of Positrons to a company call Capitol Security for the San Patricio Plaza Mall. The relationship we’ve created with Banco Popular helped us close the deal. BP has a lot of credibility and they love their Trikkes.”

So what’s to love about security Trikkes?

Security Director Pérez calls them “a lightweight, highly efficient, and economic vehicle.” And when comparing them to other options on the market, he says the Trikke is a “much better option due to its maneuverability and it being easy to operate and maintain, as far as overall cost per unit.”

But how do Banco Popular’s customers feel about the bank’s new security Trikkes?

“The public is impressed by the vehicle and its innovative features,” says Pérez. It’s a sentiment echoed by Trikke Rep. Rivera when speaking of Puerto Ricans’ overall response to the Trikke.

“The reaction has been just great,” he says. “Clients and potential clients here are realizing how good and reliable Trikkes are for patrolling the inner city, and how good they’ve been for crime prevention.”

Some of Rivera’s other major clients include the municipal police departments of San Juan, Yauco, and Corozal, and San Juan’s Luis Munoz Marin International Airport, where the Positron is slated to be used by the state police. He also notes roughly nine other police jurisdictions having been using the Trikke Patroller since 2015.

“Police officers are extremely motivated once they learn how to use them,” he says. “It allows them to interact with the community in ways they never did before. The Positron is taking police work to another level.”

Rivera says he expects more and more security operations on the island to embrace the three-wheel mobility vehicle. As for the reason, perhaps Banco Popular’s head of security sums it up best, calling security Trikkes “a totally worthwhile investment for serious security programs.”