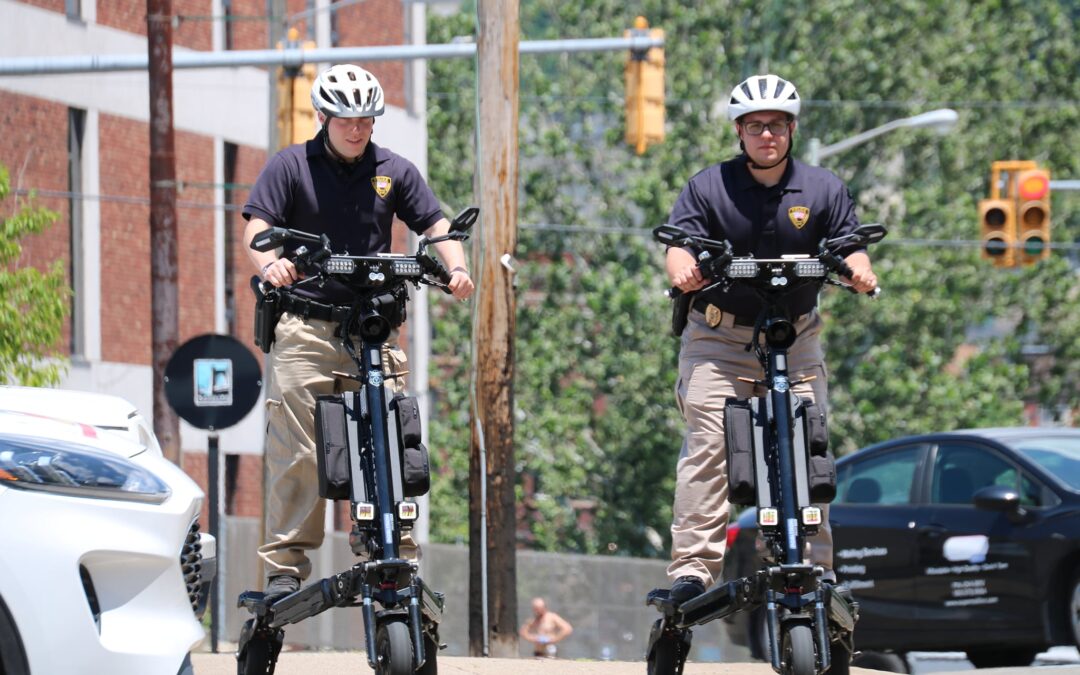 Personal electric vehicles: ready for police tasks when a typical police car is not the best option.

Police Trikkes are turning heads and having a positive impact on the community of Wheeling, West Virginia, according to several local media stories.

Currently, two Trikke Positron are roaming the metropolitan area bordering the Ohio River and the foothills of the Appalachian Mountains, thanks to an anonymous donor.

“Immediately upon trying them, we thought they were really cool,” says Lt. Josh Sanders of the Wheeling Police Department in a story on the Intelligencer/Wheeling News-Register website. According to the article, the anonymous donor loved the idea of police Trikkes as much as the officers themselves.

“It’s just another tool in the tool belt,” says Sgt. Rob Safreed in the same article. “They’re very fun to ride, and I think it’ll be a really good tool for community outreach. You’ll be able to get out there in the community more, and people see you more. Plus, they can really extend the range of a typical foot patrol.”

Also in the article, Officer Sanders talks about the impact the Trikkes have already had. “Everybody wants to know what they are. So community engagement is almost instant by just having the ability to stop, have a conversation and have a positive interaction.”

Meanwhile, in a WTRF-TV story about the department’s “fresh new ride,” the same officer Sanders says of the Trikkes: “They’re silent, they can sneak up on folks. They’re fast. It does not take a whole lot of effort like it would a bicycle or foot patrol.”

The Trikkes have already been deployed at several festivals in the area — including the Fourth of July Festival, the Italian Festival, and Waterfront Wednesdays — and the department plans to use them at future local events.

“Usually we’re on foot — but this will give us a quicker response during festivals and those types of larger gatherings,” says Sanders in the Intelligencer story.

Beyond that, he adds in a WTOV news story, the Trikkes can also be helpful in situations that call for special operations.

“Where are the hot spots? Where is there trouble, what type of trouble is that? As part of that operation, we may deploy vehicles like these,” says Sanders. The special operations commander also sings the Trikke’s praises on the Wheeling Police Department Facebook page:

“Already, several residents have seen the positive impact these new Trikkes are having in their area, by just having the ability to stop, have a conversation and have a positive interaction. Being able to make this addition to the Wheeling PD, with a heartfelt thanks to our anonymous donor, will no doubt increase our visibility, response time and enhance our continued efforts on community policing.”

The department also tells its Facebook followers that the Trikkes are personal electric vehicles ready for police tasks when a typical police car is not the best option.